Boxing: Getting the edge in Aussie Rules Football

TOUGH. Aussie rules footballers are touted as one of the toughest type of sportsmen and sportswomen. The hardknocks, the endurance, speed and agility that is required, means that conditioning the body and the mind is no easy task.

Clubs at a local, region and national levels are continually trying to find that edge that will prepare their players better than those of their opponents. Pre-season and  strength and conditioning training has changed significantly over the years. Gone are the days where players could rock up to training with no additional work, down a couple of four n twenties and have a beer at half time. Aussie rules is an elite sport. But there can be no disrespect to the efforts, hard work or talent those players of previous era’s. They were bred as tough as nails and had little of the supporting fitness coaches and equipment that players do these days. Controversy surrounding getting ‘the edge’ back then was not about ‘supplements programs’, but of new training methods.

One of those methods that initially drew curiosity and skepticism was that of Essendon’s 1972-74 fitness coach, Jim Bradley. In an article published in the Age on June 27, 2013, by Peter Hanlon, referred to Bradley as the original ‘Weapon’.

The name Jim Bradley is synonymous with boxing in Australia. Bradley introduced speedball work into the Essendon training regime and the rest is history. He is often quoted as saying “You’re punching a ball and now you’re going to kick a ball, you do the same thing.”

Although the use of speedballs was the first introduction of boxing to the AFL (or VFL), other areas of boxing training have been further integrated in football training and are used extensively today. But why? Players aren’t allowed to hit each other on the field.

If we got into the sports science of it, there would be a myriad of reasons. But the four core reasons are: Aerobic Capacity, Strength, Hand-Eye Coordination and the big one – FEAR.

There are lots of different ways to increase your aerobic capacity. Boxing relies on the use of what is similar to intensive interval training. By working intensely in 3 minutes rounds for 6 or more rounds with short rests in between and include sprint interval work such as fartlek. This type of workout mimics the type of work that footy players do on the field. For example sprinting for 50m and then jogging, following by more sprinting, or tackling and working in the pack, for short intervals. The beauty of this type of work is that it will increase your lactate threshold This is not to say that aerobic endurance isn’t important and doesn’t have its place, in fact this type of H.I.I.T. work requires a solid aerobic foundation. 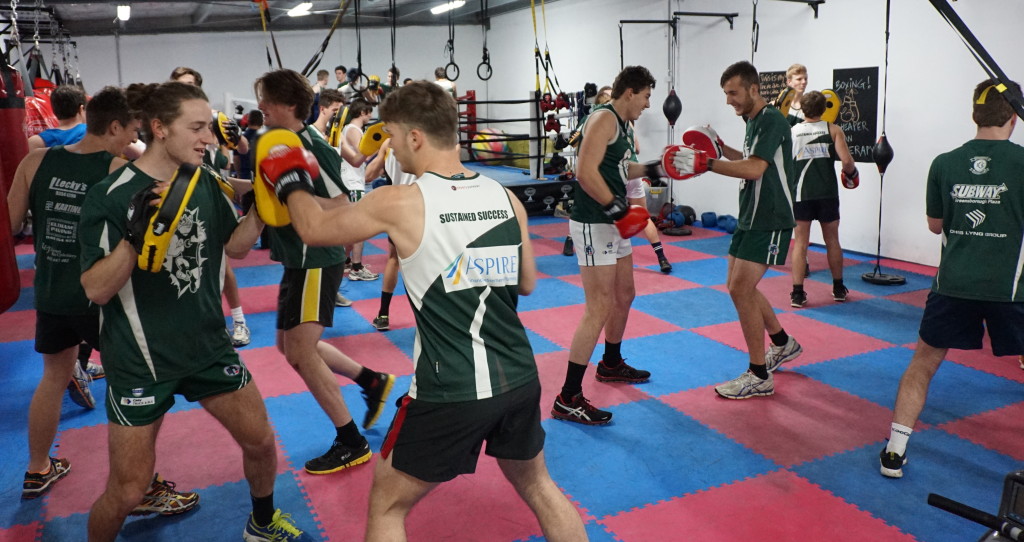 There is no shortage of strength training programs for football players. A lot of it tends to focus on weight equipment such as machines, barbells and dumbells. All of which are beneficial and effective, but not all-encompassing.The  Website http://australianfootballstrengthcoach.com.au/home/ highlights the common mistakes that can influence the effectiveness of the training programs. By adding boxing into a fitness program, many of the drawbacks of weight based training is overcome. Boxing challenges the body by requiring the application of strength and resistance in multiple planes of the body. The movements and techniques used in boxing require whole of body work. Boxing isn’t all about the arms like many people perceive it to be. It requires excellent core, hip and leg strength to deliver a combination of punches. Many of those stabiliser muscles that don’t get a workout using weight machines get a fantastic application in a round of boxing.

In terms of hand-eye coordination, boxers are almost second to none. The concentration and coordination required to block, duck, slip or parry a punch and then select and deliver a successful blow to your opponent is extraordinary. And many a time we have heard about the quick hands of a footballer. The ability of a players to mark and deliver a handball to a team mate in a short space of time is critical. It therefore follows that the pad work involved in boxing training can assist in the improvement of hand-eye coordination – provided you have a trainer that is quick on the pads and can really work on the reflexes.

The last if not most important element that boxing can bring to a football players is ‘nerve’. According to ESPN (‘Boxing’s Knockout Punch’, ESPN.com, April 21 2004) boxing was ranked Number 1 as the toughest of all sports. Putting endurance, aerobic capacity and strength aside, it was ability of the boxer to overcome fear that was most pronounced and rendered it the ‘toughest’.

Footballers are required to put their bodies on the line, time after time. The tackling, the hardball gets, the screamers. Putting one’s body in ‘danger’ continuously requires footballers to overcome their fear. You have to be willing to hit (with your body) or get hit. Just the physicality is exhausting, but when you add in the exhaustion that comes with the fear, we find that they are having to work twice as hard. Fear increases the heart rate and the breathing comes faster. Oxygen is in greater demand as a result, which is challenging when you need as much oxygen as you can for your body to perform.

So this is where boxing can help. When a boxer stands in the ring, he must be willing to overcome his own fears internally and then face his opponent – literally. Knowing that getting hit is inevitable, a boxer must just get on with it. However, when it comes down to it, the fear of getting hit is generally greater than actually getting hit.

When a footballer incorporates boxing (in the ring) into their training regime, they start to condition themselves against the fear. They start to increase the level of nerve and mental resistance to put the body on line. They just do it. Footballers boxing against opponents (typically team mates) should always be performed however in a safe and supervised environment and be shown correct technique. Otherwise they aren’t developing the other skills (strength and hand-eye coordination) as previously discussed. And the risk of injury also increases. So make sure you have a trainer that knows what they are doing.

So if you play aussie rules, maybe have think about throwing on the gloves. There is so much to gain. 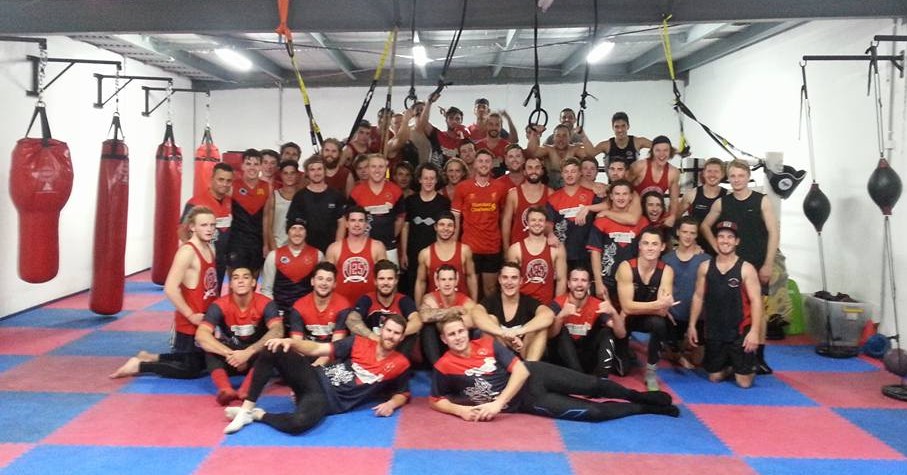